Paul Ryan is a liar

When Paul Ryan expresses concern for the deficit and for our national economy, he is belied by his own actions. Below, thanks to Chris Hayes of Up with Chris Hayes is a list of his votes in Congress over the past few years. Apparently Ryan's "Budget Plan" and his concern over financial matters only matters when he needs Tea Party support or wants to get President Obama out of office. How can we believe that he would ever follow his own precepts based on his past record? 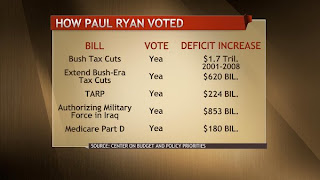 Posted by William O. Beeman at 12:58 PM No comments: Links to this post