It was a political slogan soaked with Iranian history, religion and cultural identity.

"This month is a month of blood. Yazid will be defeated," they chanted on the streets of Tehran last weekend in a popular uprising that roiled the Iranian state and spurred a massive ongoing crackdown.

Beeman-Cov-011The rallying cry referred to one of the Iranian nation's founding myths, the story of Imam Hussein, who fought against the despised Caliph Yazid for the throne of Islam in a 7th century battle.

The story is so central to Iranian national identity that it is reenacted regularly before and during the holiday of Ashura in plays called tazieh that have been explored for years by William O. Beeman, an Iran expert and professor of theater and anthropology at the University of Minnesota.

"People live with this very central event in their religious life," said Beeman, who has written a book on tazieh called "Iranian Performance Traditions," due out next year.

"They’re encouraged to personalize it," he said in an interview this week. "It’s been recast in symbolic terms. Imam Hussein is the central figure in Twelver Shiism, He occupies the same role as Jesus in Christianity. It’s a perpetually recited story, pervasive throughout society."

Iran's street-protest traditions have long been laced with elements of theatrical drama, as explored by The Times a few days ago. More explicitly than ever last weekend, the protests were fueled by the tradition of tazieh and the story of Imam Hussein, who Shiites believe was robbed of his rightful leadership role, just as Iran's opposition believes Mir-Hossein Mousavi was robbed of the presidency. 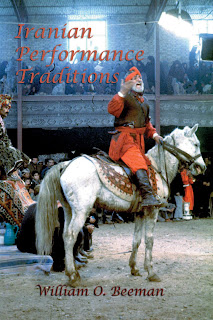 Last weekend, some protesters held aloft green flags of Islam commemorating the first 10 days of the Islamic month of Muharram, when Hussein was matyred in battle on the fields outside the Mesopotamian city of Karbala.

According to Beeman, anthropologists believe all societies are interlaced with such founding myths, social dramas that people fall back on at times of grave crisis.

"In order to restore social order, they have to go through a ritual period," Beeman said. "People gravitate quite naturally to the ritual expressions that already exist in their cultural vocabulary."

But as far as myths go, Hussein's is particularly powerful when it comes to galvanizing the Iranian public at this particular time.

Iran-beeman Just as Hussein fought under the green banner of Islam and the family of the Prophet Muhammad, the opposition has adopted the color as its own, in contrast to the red worn by Yazid.

And these colors have become identified with Mousavi -- green -- and his hardline opponent, President Mahmoud Ahmadinejad -- red. 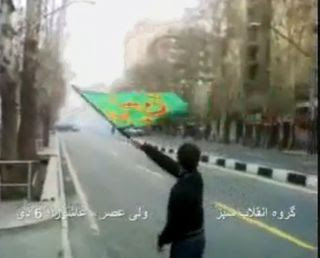 During the tazieh plays, the audience is encouraged to identify with the people of Karbala, who did not come to Hussein's aid during the fateful battle, just as protesters today are calling upon ordinary Iranians and members of the security forces to join in the struggle against Iran's establishment.

"By their inaction, the people of Karbala were less than admirable people," Beeman said. "In present-day mourning rituals, they’re asked not to just stand by."

Iranian authorities tried hard to avoid being cast as Yazid but ultimately failed, according to Beeman.

"When you start beating on people who support you, you break a bond between leader and follower," said Beeman (pictured), who speaks fluent Persian and has traveled frequently to Iran.

If Iran's history is any guide, the current group in power is doomed, Beeman said. "I think that the chance that this leadership group is going to be changed or out of office is very strong," he said.

But Beeman and others worry that Iranians will hue too closely to the Hussein narrative.

On the fields of Karbala in AD 680, one relative of Hussein after another was slaughtered by the mighty army of Yazid. One was an infant. Another was killed on the day of his wedding.

"Every possible tragedy you could imagine is projected onto the Karbala story," Beeman said. "In this situation on the street, if you identify with the Karbala story and you’re a protester, you’re emboldened to go up against anyone who is attacking you."

So far, Iranians have been adept at protesting while avoiding being killed. But some worry that could change. Hussein's myth may be powerful as theater and as a cultural backdrop to social change, but it also is a tough act to follow. 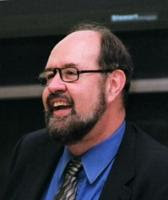 "Hussein knows he was going to be martyred," Beeman said. "He rejects all attempts to save him because he submits to the will of God. In his death and refusal to compromise, he serves as an example for the rest of us. But it's an unattainable example. Nobody can be as good as Imam Hussein."

Photos, from top: The cover of "Iranian Performance Traditions." Credit: Mazda Publishers. A still from amateur video footage showing a protester holding a green flag during Ashura protests in Tehran. Credit: YouTube. Portrait of the author. Credit: University of Minnesota
Posted by William O. Beeman at 11:13 PM No comments: Links to this post