The GOP's fever for war will destroy any hope of shrinking government Will Iran Nuke the Tea Party? (Charleston SC City Paper)

The GOP's fever for war will destroy any hope of shrinking government
Will Iran Nuke the Tea Party?

Comments by William O. Beeman: I don't agree with Ron Paul on much of his campaign, but he is dead right about Iran. It is refreshing to find a writer who has the courage to speak the truth about the insane American obsession with Iran. However, the obsession is not so much real as it is opportunistic. Most American politicians know that attacking Iran is a political "gimmie." It costs absolutely nothing, since everyone attacks Iran--both Democrats and Republicans--and it means nothing. The only thing it does is to make the candidate look "tough" against an "enemy" that is no enemy at all. Iran is the ultimate straw man in American electoral politics. The American public should be calling every cheap shot on Iran for what it is: political chicanery.


Why is it that during the last decade, when Republicans controlled all three branches of government, the national debt still exploded? Why is it that the last time a real conservative sat in the White House — Ronald Reagan — government grew astronomically?

If you asked the average conservative during the Bush years why government continued to grow so rapidly, the typical answer would have been that we were fighting two wars. When conservatives are asked why Reagan did not fulfill his promise to scale back the federal government during his tenure, they typically give one of two answers: either that the Democrats did not follow through on their pledge to cut spending or that we were in the middle of the Cold War.

"Wars cost money," Franklin Roosevelt once said, and no doubt any nation would pay virtually any cost to protect itself against a real threat. Conservatives almost unanimously supported Reagan's defense build-up because they believed the Soviet Union was a serious threat to our safety. Most conservatives gave Bush a pass on his profligate spending because they believed the wars in Iraq and Afghanistan were priorities. However, when it comes to today, are there any actual threats on the horizon that warrant what we currently spend on our military adventures?

Iran is certainly no such threat. To say that Iran may get a nuclear weapon and become a potential threat to its neighbors is one thing; to say that it is a threat to the United States is another. Yet too many conservatives continue to confuse the two, or as the former head of the U.S. Central Command retired Army General John Abizaid explained in 2007: "I believe the United States, with our great military power, can contain Iran ... Let's face it: We lived with a nuclear Soviet Union, we've lived with a nuclear China, and we're living with nuclear powers as well."

Gen. Abizaid then put the notion of a potential nuclear Iran into even clearer context: "[The U.S.] can deliver clear messages to the Iranians that makes it clear to them that while they may develop one or two nuclear weapons, they'll never be able to compete with us in our true military might and power."

Abizaid makes an important and glaring point: No nation on earth can currently compete with America's military might. Iran is even near the bottom of the list. Foreign Policy's Stephen Walt explains: "One of the more remarkable features about the endless drumbeat of alarm about Iran is that it pays virtually no attention to Iran's actual capabilities and rests on all sorts of worst-case assumptions about Iranian behavior."

Walt then points out that the U.S. spends $692 billion on defense, while Iran spends only $9.6 billion, before noting that currently America has 2,702 nuclear weapons in deployment and 6,000 in reserve, while Iran has zero. "By any objective measure ... Iran isn't even on the same page with the United States in terms of latent power, deployed capabilities, or the willingness to use them," Walt says. "Iran has no powerful allies, scant power-projection capability, and little ideological appeal. Despite what some alarmists think, Iran is not the reincarnation of Nazi Germany and not about to unleash some new Holocaust against anyone."

Walt adds, "The more one thinks about it, the odder our obsession with Iran appears."

Odd indeed. There is a debate within the GOP right now between Tea Party members who recognize the need to cut government spending across the board and Republicans, like Sen. Lindsey Graham and Rep. Tim Scott, who are willing to cut everything but the military. The problem is that second only to entitlements, you can't even begin to substantively balance the budget or reduce the national debt without addressing the black hole that is Pentagon spending.

There is no reason America can't have the strongest military on earth while still being fiscally responsible. Part of this balance necessarily means favoring foreign policy sobriety over constant hyperbole. It also means recognizing practical security realities.

The reality is that Iran is not a threat to the United States. Not even close. To the degree that conservatives actually believe that Iran is some great "threat" takes the Right straight back to the Bush era, when a zeal for spending cuts took a backseat to war fever. That some in the Tea Party are occasionally the loudest in desiring U.S. action against Iran makes the prospects for smaller government even dimmer.

Wanting to limit government and police the world simultaneously is a maddening yet enduring contradiction conservatives simply can no longer afford. Neither — quite literally — can this country.

Posted by William O. Beeman at 10:21 AM 2 comments: Links to this post

William O. Beeman--Hikers in Iran--Caught in Web of International Politics

Hikers In Iran - Caught in Web of International Poltics 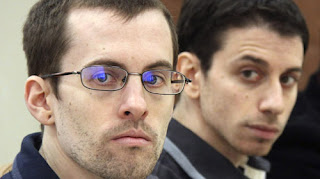 Editor’s Note: Two young American hikers have been held as “spies” longer than other foreign nationals there. Will Ramadhan help free them from the perfect web of politics?

American Journalist Shane Bauer and his traveling companion Josh Fattal have been incarcerated in Iran for two years—longer than any other international detainee in the Islamic Republic. There is some hope that they may be released soon.

The month of fasting and prayer—Ramadhan—is now upon us. It is also traditionally a time for forgiveness and clemency, providing a suitable occasion for the Iranian judiciary to let them return home.

The length of their detainment without trial is unprecedented for foreign nationals in Iran, and it has been a puzzle for many as to why they have been held so long.

Past detainees have been held for a few months, sometimes made to “confess” their crimes and released in a show of mercy after all propaganda value had been drained from their cases. Although no answer can be definitive in Bauer and Fattal’s situation, a good guess is that they have been the victims of both internal and international politics.

The two men along with their companion, Sarah Shourd, who was released last year on compassionate medical grounds, were charged with crossing the Iranian border from Iraq without proper documentation. Subsequently they were accused of spying for the United States. Americans have found these charges to lack credibility. However, to take the accusations at face value is to miss the point of their issuance.

Iranian officials know absolutely that there are American operatives in Iran, as well as operatives from Mossad, the Israeli intelligence service. If they didn’t know it, they can only look to the public statements of President George W. Bush, who declared as much. Iranian nuclear scientists have been murdered in Iran; most recently Dariush Rezai, was shot to death on a Tehran street on July 23.
Moreover, Iranians know that the border in Kurdistan over which Bauer, Fattal and Shourd traveled--a popular tourists’ trek—has also been a route for infiltration of spies since the U.S. occupation of Iraq in 2003. They also know that Israel has been courting the Kurds for many years. Iranian Jews, residents in Israel with perfect language and cultural skills, are perfect spies.

Thus, the message Iran is trying to send the United States and the world is not that Bauer, Fattal and Shourd are spies, but rather that Iran knows spies are in their country, that these spies are supported by the United States and Israel, and that the spies have entered the country via the route the three hikers took. A show trial is a way to point up these basic facts.

The Iranians were probably also hoping that the three Americans might serve as coins to use in its negotiation with the United States to release a number of Iranians, who had been arrested in Europe for violating trade sanctions--and who seem to be held in secret under U.S. authority.

Such a trial might have taken place in 2009, when the three friends were first detained. However, Iran exploded in political turmoil that year. The presidential election that July turned into a gigantic public protest against President Ahmadinejad and Spiritual leader, Ayatollah Ali Khamene’i. In the face of this political upheaval, conducting a show trial of American citizens was not only inconvenient, it threatened to make the government look even worse in the eyes of the world.

Since the government was blaming the United States for the political uprising, to release the hikers would have been seen as capitulating to the forces that Ahmadinejad and Khamene’i claimed were trying to overthrow them.

Internal Iranian politics got worse over the following year. Open rivalry between Ahmadinejad and Khamene’i dominated Iranian politics. The judiciary, under the direction of Khamene’I, may have found it inconvenient to take a line that would seem to be soft on the United States.

Furthermore, in recent months the United States has made things much worse.

The Obama administration has once again returned to three tired accusations that were promulgated by the George W. Bush administration as a way to build support for a possible attack against Iran. These include concerns over Iran’s nuclear program; accusations that Iran was aiding militias in Iraq, who were attacking American troops; and that Iran was aiding al-Qaeda.

All of these claims are very old—and are as insubstantial and specious as they were when first put forward in 2003. One may choose to believe them or not, but it is certain that their reiteration by the Obama administration has not made it any easier for the Iranian government to show clemency toward Bauer and Fattal.

For their sake and the sake of their families and friends one can only hope that the occasion of Ramadhan with its salutary sentiments and message of forgiveness will result in the release of these two young men, who appear not to have deserved their fate.