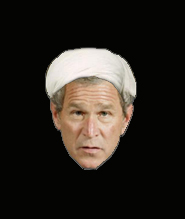 Posted by William O. Beeman at 11:33 AM No comments: Links to this post

Iran's security chief, Hassan Rowhani proclaimed in October, 2004 that it was in Iran's best interest for George W. Bush to be re-elected over John Kerry. His comment left American commentators stunned in disbelief. However, it is now clear that Rowhani was right: the Bush administration has done more than any other American leader to advance the interests of Shi'a Islamic political leadership in Iran and indeed, in the rest of the Middle East. Some groups of religious supporters in Iran are beginning to call President Bush 'the 13th Imam,' an ironic reference to the 12 historical Imams sacred to the branch of Shi'ism dominant in Iran, Iraq and Lebanon.

President Bush's support for Shi'ism may be unintentional, to be sure, but there is no doubt about the effects of his administration's policies in boosting Shi'ite power throughout the region.

The Bush administration has lent massive help to the Iranian economy by allowing U.S. corporations to circumvent the Clinton-era economic sanctions imposed on the Islamic Republic. While the Treasury Department cracks down on insignificant infractions of the trade sanctions, such as prohibiting U.S. publishers from providing editorial services to Iranian authors, and restricting scholarly groups from holding meetings in Iran, it overlooks large American corporations operating in Iran through dummy subsidiaries operating out of Canada, Europe and Dubai. Oil service companies, including Halliburton, continue to conduct business in Iran on a pre-revolutionary scale, while the shops and bazaars are awash in American goods.

Additionally, by failing to exercise any control whatever over rising oil prices, the U.S. government has created massive windfall profits for the Iranian government. In the late 1990's Iran's economy was in disastrous shape. With oil selling at well over $50 a barrel, Iran is awash in money again.

However, the greatest benefits have been political. Nothing has done more to increase the popularity of Iran's Shi'ite leaders than the Bush administration's attack on Iran's nuclear development. Tehran's leaders are highly unpopular with the majority of Iran's youthful population because of their social policies, but Iran's right to develop its own nuclear industry is the one point on which virtually all Iranians are agreed. This strong national feeling has boosted the credentials of the mullahs, and will likely rocket former clerical President Ali Akbar Hashemi-Rafsanjani back into the presidency.

In Iraq, of course, the desperation of the Bush administration to demonstrate America's ability to conduct elections in by January 30 was effectively utilized by the majority Shi'ite community-especially its astute leader, Ayatollah Ali al-Sistani. The result is that the Shi'ites are likely to emerge as the dominant power in Iraq.

Pressure on other Middle East regional powers to "democratize" has resulted in the emergence of Shi'ite power in minority communities throughout the region. The United States encouraged Saudi Arabia to liberalize its governmental system to allow the election of local leaders. The chief beneficiaries were the Shi'ites in Saudi Arabia's oil-rich Eastern Province. Long disadvantaged and downtrodden by the conservative Wahhabi-dominated Saudi government, the Shi'ites now will have their own local officials, and real political power for the first time in the history of the State. Qatar has established a separate legal court for the Shi'ites, and the Sunni rulers of Bahrain are on tenterhooks worrying about how U.S. pressure will translate into increased power for their country's Shi'ite majority population.

President Bush's insistence that Syria evacuate its troops from Lebanon is a godsend to the Shi'ites there. Hezbullah, the Shi'ite movement established more than 20 years ago to combat oppression from Maronite Christians and Sunni Muslims is now the strongest, most organized political party in Lebanon, with an effective military wing. U.S. actions in that nation will eventually lead to Shi'ite domination of Lebanon, after a likely revival of the civil war that Syrian occupation quelled.

Even the Syrians are benefiting from President Bush's politics. Bashar al-Assad, Syria's current leader from the Alawite branch of Shi'ism, is a weak leader, dominated by shadowy figures left over from his father's heavy-handed rule. American assaults on the Syrian government have accomplished the almost impossible task of increasing Assad's popularity and the credibility of his government.

As the Bush administration must surely know, Shi'ite politicians favor the incorporation of Islamic Shari'a law into the governmental structures of their nations whenever possible. The realization of the Republican vision of "democracy breaking out all over" will give these religious-oriented politicians the best chance to realize this vision in more than a thousand years. This will truly earn President Bush the title of one of the greatest promoters of Islamic rule in all of history - a fitting legacy for America's 43rd President.
--------

William O. Beeman is Professor of Anthropology and Director of Middle East Studies at Brown University. This year he is Visiting Professor of Cultural and Social Anthropology at Stanford University. His forthcoming book is The "Great Satan" vs. the "Mad Mullahs:" How the United States and Iran Demonize Each Other.

Posted by William O. Beeman at 9:20 AM No comments: Links to this post